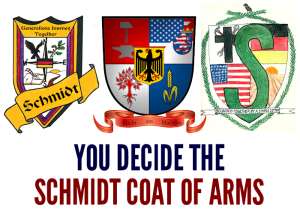 For the last several centuries, wealthy European families received official family crests from the authorities for noble deeds, academic achievement, or exceptional service to one’s ruler. Our Schmidt ancestors were humble, hard-working peasants in a tiny village called Machtlos, hidden away in the dense Wildeck Forest. As such, they were never recognized in this way. This is all about to change.

Vote using the form below for the coat of arms that you prefer to become the official crest of the Schmidt Family of Machtlos, Germany!

The crest with the most votes will be redrawn into a sleek, finished form by a professional graphic artist, and then registered with a heraldry society and will become the legal coat of arms for all the descendants of Hans Schmidt and Barbara (Engeling) Schmidt, who lived in Germany in the 1600s. The chosen crest will also be printed on real German steins and other items available at the record-breaking Schmidt Family Reunion in Spencer, Iowa on July 30-31, 2016.

Create your own user feedback survey